Article 50 and the Brexit Process

The UK has served the withdrawal notice on the European Council (ie, Heads of Government / State of the EU Member States), as per the process outlined by Article 50 of the EU Treaty on European Union (“TEU”).

The formal negotiations between the UK and the 27 EU Member States, excluding the UK (“EU27”), will now begin with a view to negotiating and concluding a withdrawal agreement.  The withdrawal notice has set the two-year Brexit countdown clock in motion. 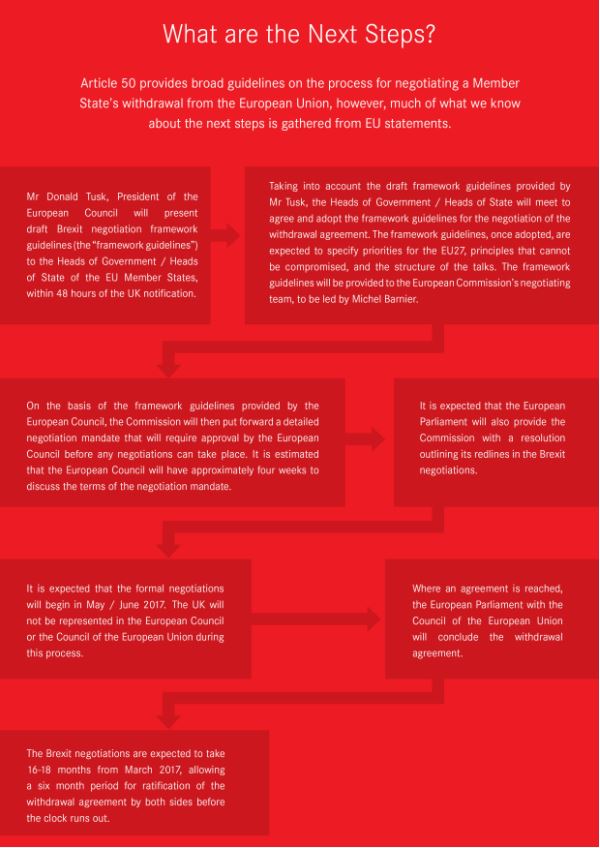 Mr Barnier, in his opinion piece for the Financial Times on 27 March 2017 said that there is a need to address three significant uncertainties created by the UK’s decision to leave: (i) rights of the 4.5 million EU citizens faced with an uncertain future (ie, EU27 citizens in UK and UK citizens in EU27); (ii) beneficiaries of EU budget programmes and the need for UK to “settle… accounts”; (iii) Northern Ireland border as a new external border of the UK.

Notification to withdraw from the EU will automatically result in the UK ceasing to be an EU Member State two years after the UK notification unless either:

What would a lengthy period of UK withdrawal mean for Ireland?

It is likely a ‘business as usual’ approach would be adopted in terms of trade / free movement between the UK and Ireland, as the UK would still be an EU Member State pending conclusion of the withdrawal agreement.

Could the UK exit the European Union without a withdrawal agreement being reached?

Yes.  The status of EU law in the UK would be in question if the UK leaves the EU without a withdrawal agreement providing for a transitional period for phase out of EU laws.

Future Arrangements Between the UK and EU

Article 50 does not govern the process for agreeing future arrangements between the UK and EU, only the process for negotiating withdrawal.  Thus, a situation could arise where there are two sets of negotiations taking place in parallel; negotiations surrounding the terms of the withdrawal agreement and negotiations between the UK and EU governing future arrangements.  Mr Barnier’s opinion piece in the Financial Times on 27 March 2017 stated that it is necessary to agree on “the orderly withdrawal of the UK before negotiating on any trade deal”. 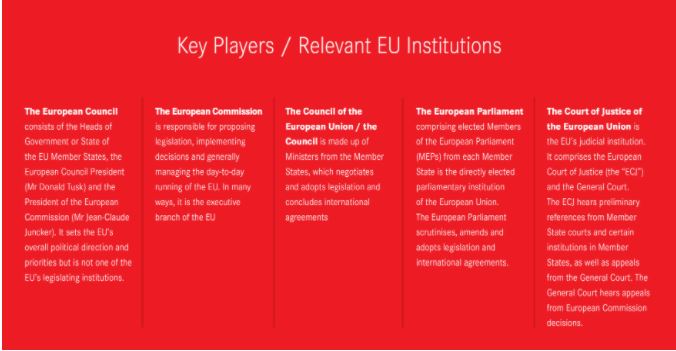