Ahead of Matheson's London Brexit briefing last night on the 'Importance of the UK-Ireland Relationship Post-Brexit', Managing Partner Michael Jackson and Partner Liz Grace met with Lord Jonathan Hill, former UK EU Commissioner for Financial Stability, Financial Services and the Capital Markets Union and former Leader of the House of Lords, and Irish Minister of State Eoghan Murphy at the House of Lords. Speaking about Brexit, Lord Hill noted that the outcome of the Brexit referendum in the UK was not ‘an accident or a fluke’ and dismissed outright the idea of a second vote on the issue.

Commenting on the issue during the same interview, Minister Murphy described London as remaining strong as a financial centre and Ireland as ‘the natural location of choice’ for UK companies or companies currently using the UK as a gateway in to the European Union.

Matheson Managing Partner, Michael Jackson said the Irish approach was one based on ‘partnership rather than predatory engagement’ and that this was welcomed by clients.

On the same day that the House of Lords was debating Article 50, Lord Hill and Minister Murphy and Matheson Managing Partner Michael Jackson were interviewed about their views on Brexit, its impact on the Financial Services sector and the importance of the Irish-UK relationship post-Brexit.

Lord Hill also described a shifting mood in the UK capital saying that, in his opinion ‘people don’t want to leave London’ and that while businesses have to make decisions in their interest it wouldn’t be like ‘a switch flicking’ and that the City of London would suddenly ‘migrate to Paris, Frankfurt or elsewhere.’ 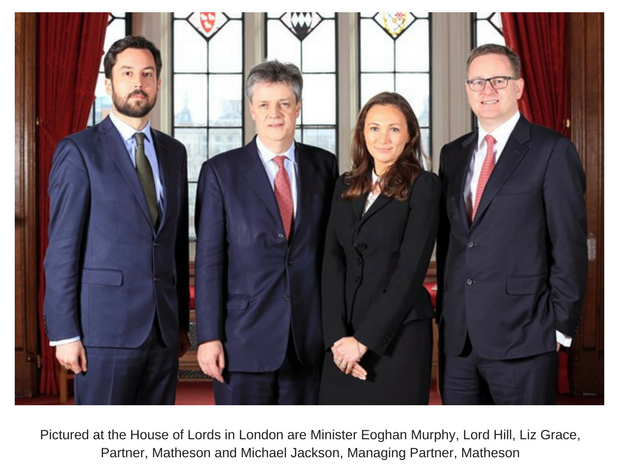 Minister Murphy strongly reasserted Ireland’s commitment to the European Union in the course of the interview and stated that ‘London will continue to be a strong global financial services centre and that this is in the EU’s interest’.  He also set out the levels of investment and planning being undertaken by the Irish government to prepare for any opportunities arising from Brexit and cited common language and legal systems, talent availability and tax and regulatory provisions as being the basis for Ireland as the ‘natural location of choice’ for UK companies, or those based in the UK, who wanted a gateway in to the EU post Brexit.

Matheson’s Managing Partner, Michael Jackson commented on the importance of the Irish-UK relationship particularly as it relates to business engagement.  He said that ‘Ireland’s approach differs from others’ and it is ‘welcomed by the clients we talk to in London’.

Concluding the interview Lord Hill said that ‘we’ve got to get on with our life and Europe has to get on with its life’ and that the quicker that happens ‘the better it will be for Europe, for the UK and for business…’

These and other topics were further discussed at the Matheson Brexit Briefing later that evening attended by 200 clients and guests.