Matheson Brexit Blog: The Bell Goes for Round Nine

In his most recent Brexit Blog, Matheson Managing Partner Michael Jackson looks at the current state of play of Brexit negotiations - and whether a deal can still be done. 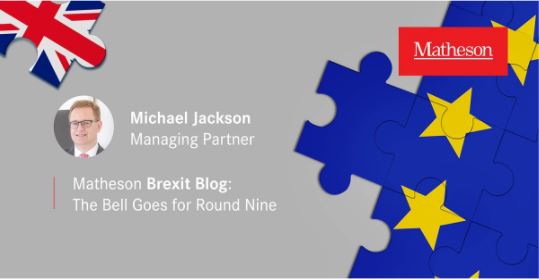 When Brexit happened on 31 January last, there seemed ample goodwill to deliver a comprehensive trade agreement, with some in Britain confidently suggesting it could be done within the year. This week, the sides have entered into what will be the ninth round of formal talks in relation to that trade agreement. This week also saw the third meeting of the EU-UK Joint Committee under the Withdrawal Agreement taking place, co-chaired by British minister Michael Gove and European Commission Vice President Maroš Šefčovič. In the continuing drama that is Brexit, the onset of autumn in the northern hemisphere, complete with falling leaves, fading light and dwindling growth, provides a suitable backdrop to the political mood music which suggests that, at best, an agreement in principle (possibly even on a sector by sector basis) with further details to be agreed may now be the likely landing point.

A Very Specific and Limited Way?

After months of conspicuously slow progress and growing concern, the UK Internal Market Bill published on 9 September reduced diminishing hope for a comprehensive agreement to deep uncertainty. The Bill’s proposals purport to empower Westminster to unilaterally misapply parts of the Withdrawal Agreement, and the manner of their coming to light in a leak to the Financial Times, caused a political firestorm. Northern Ireland Secretary Brandon Lewis’s confirmation in the House of Commons that the Bill could lead to international law being broken in a “very specific and limited way” led to fundamental questions being raised, both within Westminster itself and across the EU, about the UK’s commitment to an international agreement and whether the political preference of the UK government was now for a hard Brexit.

Claims that the Bill was necessary because the Withdrawal Agreement had been rushed and was confusing, at a time when reaching a trade agreement would require similar late night sessions and last minute compromises, did little to encourage belief that the negotiations could reach a successful outcome. The EU’s response in setting a deadline of 30 September for the UK to withdraw the offending provisions of the Bill with a threat of legal action, and the lack of meaningful UK concession, mean that this week’s talks proceed in a charged environment.  Briefings from both sides appeared to suggest, however, that (in what is a very Brexit-style irony) there was a greater air of positivity heading into this round of negotiations, albeit that the EU briefings appear tinged with a tone of slight weariness and wariness borne from experience in previous rounds. Following the lapse of the deadline yesterday for the UK to remove the offending provisions from the Bill, the European Commission confirmed today that it has issued a letter of formal notice to the UK for breaching its obligations under the Withdrawal Agreement, marking its intentions to initiate legal proceedings. It has given the UK one month to respond.

The purpose of the Bill, from the UK government’s perspective, is to ensure that Northern Ireland cannot be detached, or even “blockaded” to use the more loaded language increasingly used by the Bill’s supporters, by the EU for the purposes of food imports from the rest of the UK.  The issue hinges on the UK’s future status as an approved third country for the purposes of food imports. The Withdrawal Agreement ensures Northern Ireland remains in the EU single market, but the rest of the UK will not. The EU is clear that it was always understood that, absent an acceptable agreement, this meant that exports (including food) from Great Britain going to Northern Ireland could be impacted. The EU position is that it awaits sight of the proposed UK rules, including sanitary rules for products of animal origin, before it makes a decision as to the position to adopt. This position is also informed by a continuing (and increasingly frequently voiced) EU concern that the UK’s reluctance to agree to level playing field provisions would open the prospect of the UK becoming a centre for production at lower standards than those imposed by EU rules with access to the EU market in a way which would disadvantage EU producers. So what for the UK is a matter of principle (or, for some, sovereignty) requiring a pre-emptive strike, that cuts through an existing international agreement, is for the EU a rule based issue, yet to be teased out. Issues of substance and differences of approach are now being winnowed together, through a rapidly expiring window of opportunity.

Mutually acceptable positions on state aid and standards (possibly avoiding the words ‘level playing field’) are likely to be the key to unlocking any form of deal. The chances of those being finalised by the EU leadership summit on 15 and 16 October are minimal, but if sufficient progress can be made over the coming weeks there may still be some possibility for a form of limited deal before the 31 December deadline. The EU negotiators have been careful, and possibly wise, not to overstress the importance of the October summit.

This is also where, what Bismarck characterised as the sausage making part of government, should not be ignored. Parliaments in Westminster, Brussels and Washington all have an important role. The Internal Market Bill was passed by the House of Commons this week, and now goes to the House of Lords where it will likely meet a very deliberative pace of scrutiny. It may well be amended and sent back to the Commons. In any event, there appears little prospect of completion before November. Will an emerging EU-UK agreement by then allow the UK government to explain that as the Bill’s objectives have been met by agreement, it is no longer required?

Less ameliorating but clearly a pressure point is the fact that it is unlikely any EU-UK agreement that undermines the Good Friday Agreement, even if it were to be considered, would be approved by the European Parliament. In Washington all eyes are on the presidential election and on whether the Republicans can hold their majority in the Senate. Most indications at this point, however, suggest that the Democrats will hold the House of Representatives. The message from key figures in the House has been clear that politically there will be no UK-US trade deal,  if the UK fails to honour the Withdrawal Agreement. These factors, together with the mounting economic and political consequences of COVID-19 and the concentrating effect of a final deadline, may concentrate minds in the coming weeks.

Regrettably, the lack of tangible progress to date means that it is also time to redouble preparations for failure and a harsh winter ahead. The Irish government’s Brexit Readiness Action Plan updated on 9 September sets out sectoral guidance and measures at government level. Disruption of British-Irish trade, delays on the UK land bridge, a negative pressure on Irish business and jobs from higher costs and new tariffs, pressure on Irish fisheries and interruption of supply chains are all potentially at stake. The immediate task is to prepare intensively for an outcome, which hopefully will not arise, but which is now in plain sight.

Withdrawal Agreement: European Commission sends letter of formal notice to the United Kingdom for breach of its obligations, 1 October 2020

Statement by President von der Leyen on the implementation of the Withdrawal Agreement between the EU and the UK, 1 October 2020